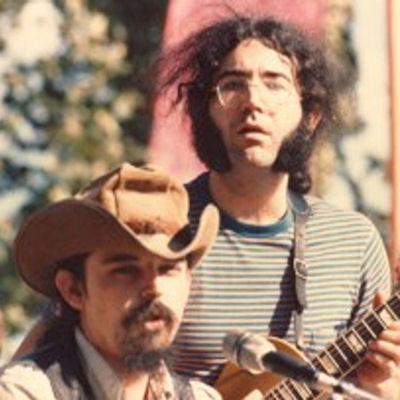 Smoothed out transitions between tracks

Shrine Expo Hall, USC. Crazy how they played in San Fran three nights, L.A. the next two, and immediately played again in San Fran three nights. They had just played two shows at The Shrine Exposition (none of these '60s shows were in the auditorium) in May and would play it again in December, after two cancelled shows in Sept. That's 6 shows in 3 bookings in one year at the venue. There were the two in 11/67, then they played in the auditorium theater in '76 & '78, for a total of 12 shows at The Shrine.

The non-circulating night after this was originally released on Two from the Vault, the first multi-track earlier than Live/Dead, taped on an 8-track Ampex brought over by Warner Bros. house engineers. This night, too, was recorded, but only three tracks have been mixed down and released. Ironically the original album cover claimed it had tracks from this night, but it didn't until the third disc was added upon reissue. But why only half a disc from this show (and not including the Dark Star)? The Cryptical>Dark Star sequence isn't much different from June or September shows, but they had a decent night. The next night is much better, though this has one of 1968's best The Eleven jams (which unfortunately has a cut).

That's it for the Other One is the average '68 run-through, but this is a nice Dark Star. St. Stephen isn't grappled with as much as passed along. That's indicative of a tentativeness, or lower energy that appears in this show, but that vibe works perfectly for The Eleven, which has a jam that turns red (there's a reel flip but we're probably not missing much; you can hear it slowing down). The night's ending jam has its moments, starting with an Alligator that has a Foothill jam @12:45 (not quite a Mountain jam), and ending with a Feedback more interesting than most.
C+ / 3 Stars

Highlights:
The Eleven - albeit incomplete, a must-hear

SOURCES: The saks_52 source has filler from an unverified '68 date, better known as the first reel of the '68 Mystery Reels (see vernon_9426; placeholder: 1968-12-31 OR currier_5427; placeholder: 1968-05-00), pegged to the Carousel, May or June. It has some track labeling and boundary issues. The tomP_116193 sounds slightly better, has the sector boundaries intact, and several needed digital corrections and clean-ups. Alligator though Feedback is bonus material on Anthem of the Sun and Two from the Vault.

1968-08-24. The next night is a 5-star show, even though the plug is pulled after 1hr50mins. It starts with an average Schoolgirl; and there's a long Potato Caboose, with a Patricia Jam @5:40 (named for the Perez Prado song from which Phil either lifted or was inspired; aka Thirteens Jam, because it's in 13/8). But the highlight is the middle section:
Dark Star>Stephen>Eleven - the 3rd such sequence extant
Death Don’t - one of the best & awesome seg in
Other One Suite - including a perfect starting Cryptical
Reviewer: charlescdavis66 - favoritefavoritefavoritefavorite - April 26, 2019
Subject: Looking for 'Death Don't Have No Mercy'
Hello. I am looking for tracks of "DDHNM" that are clean. This has been one of my very favorite songs by the core group and want to check out some different versions. It sort of disappeared from the rotation...

Reviewer: ianua ditis - favoritefavoritefavoritefavorite - August 3, 2018
Subject: "Burn Down the Fillmore, Gas the Avalon"
is what Bobby sings in Alligator. (Presumably dating to the days when the GD were business rivals of both venues, running the Carousel Ballroom?)

Anyway, this Alligator is the highlight for me, though Phil starts the jam a couple of bars too soon.

They would do a few great versions in 69-70, but the real heyday of Alligator>Caution is late 68, and this jam doesn't disappoint.